A Curling Club Is Born 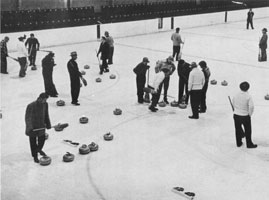 The year was 1956. A sudden upswing of interest in brooms had been noticed in the busy town of Elmira, population 2500, with members of the male population carrying brooms on the street and energetically sweeping the sidewalks.

The Reason? A new curling club had been formed in town. With 130 members, the club boasted one of the largest charter memberships of any town its size in the province.

The success of curling taking off in this hockey town was due to the efforts of three men: Jack Sumner, Recreation Director; Harold Dunk, President of the Elmira Recreation Commission; and Norval Leslie, Head of the Winter Sports Committee. As the club's membership grew, the need for a better facility became the club's number one priority, and a building committee was put into place. Elmira & District Curling Club Limited, which became the name of the Elmira Curling Club, realized its dream in 1965 when an agreement was signed by Eldale Valley Golf Limited and Elmira & District Curling Limited whereby the golf club provided land on a ninety-nine year lease. Ground was broken in July 1965 and members were in their new facility with four sheets of ice in October of that same year. There were 180 members in the club that year.

On March 26, 2006, the shareholders in Elmira & District Curling Limited, a not-for-profit shareholder corporation, voted to cancel all shares and to change the club's corporate structure. On May 2, 2006, the club officially became the Elmira & District Curling Club, a not-for-profit non-shareholder corporation owned and operated by club members. The new ownership arrangement will help the club qualify for some sport and recreation public funds to improve facilities. 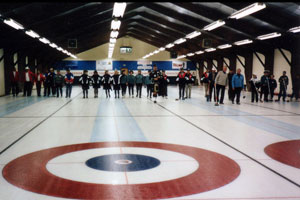 By 1977, a small addition was added onto the clubhouse to house a pro-shop for the golf club and a lounge with a bar.

Many changes have been made to the club since, including insulation, a new ceiling, an updated compressor, new lights, new carpet, refinished flooring and new curling rocks. The 1999/2000 season saw new windows and siding and new tables in the lounge, and 2002 brought us a new steel roof. The summer of 2003 saw a complete facelift for the main lounge, trading in the dark wood panelled 'Scuttlebutt Lodge' look for a cleaner, brighter, more modern feel. Recently, the club purchased four sheets of 'lite rocks': light-weight full size granite rocks for use by the junior curling program. Current efforts include planning and fund raising to replace the condenser and add a dehumidifier, to upgrade the dining room, to replace the kitchen appliances, to upgrade the water system, and to make the club fully wheel chair accessible.

The club has been the recipient of two Trillium Grants that have been used to upgrade saftey equipment and purchase various ice-making essentials such as a new scraper and a new compressor.

A silent auction at the end of the 2009/2010 season saw members raise just over $2,000 to fund an upgraded sound system to be installed at the club.

During the summer of 2010, members volunteered their time to install replacement brine pipes that run under the ice and header pipes that are located under the walkway at the window end. The pipes and headers are original and this labour intensive job will provide a quality ice surface for many years to come.

Current efforts include planning and fund raising to replace the condenser and potentially add a dehumidifier, upgrade the dining room, replace the kitchen appliances, upgrade the water system, and make the club fully wheel chair accessible.